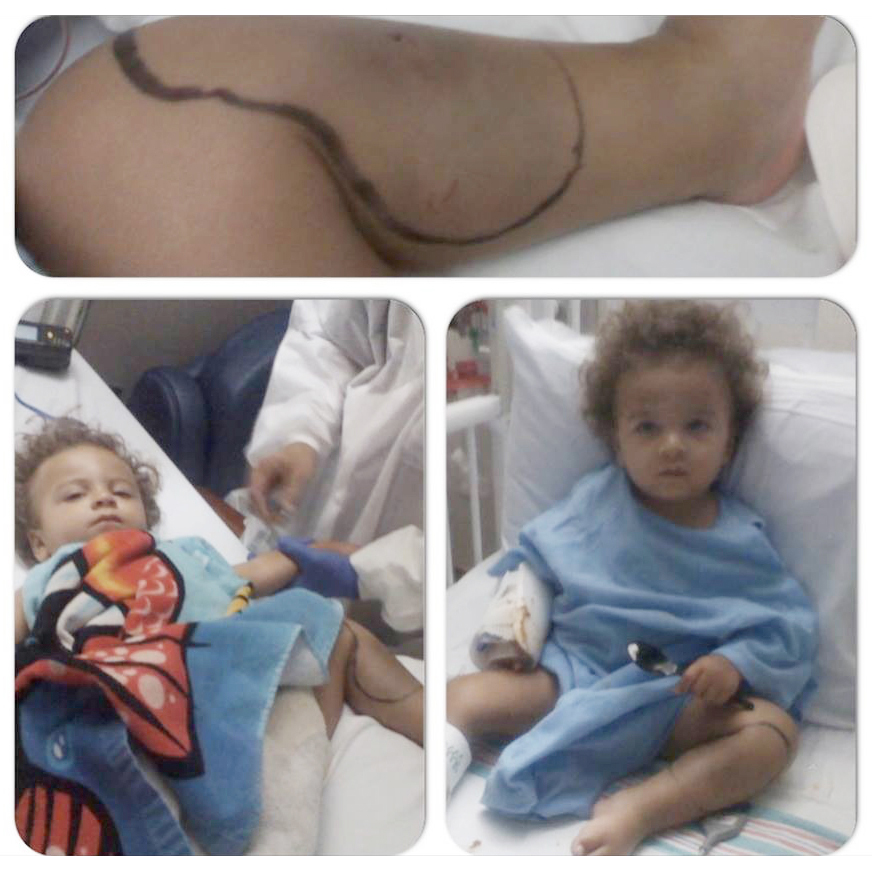 Hi Guys! I just wanted to share some awesome miracles in our midst here at Calvary Temple, so here are some great testimonies for you to be blessed with.

In this post, Donovan’s family shares the miraculous healing of their 21 month old son, and God’s grace to them in this time of need.

On the evening of June 19, 2012, my husband, Jerry, took our kids to a playground in Reston, Virginia, while I was helping prepare for one of our summer camps at church. I received a call from Jerry saying that he was taking our son, Donovan (21 months old) to Loudoun hospital and that he would pick me up on the way. I could sense the urgency in his voice and could hear Donovan screaming. In route to pick me up, Jerry heard a voice say to him, “Reston Hospital”. At that moment, he immediately made a u-turn and headed to Reston Hospital. He then called me and told me to meet him there.
As I left to go to the hospital, I called Jerry back and he informed me that Donovan had been bit by a snake on his shin and they were at the hospital. Due to Donovan’s reaction to the bite, the doctors believed the snake to be poisonous. Jerry then realized that the voice he heard was The Lord’s. With snake venom accelerating up through his bloodstream, the additional time to drive to Loudoun Hospital could have been fatal. Animal control found the snake on the playground the following morning and confirmed it was a Copperhead, a poisonous snake.

After speaking with Jerry, I called Greer Scott, my pastor’s wife, and she informed me that she would send out an email to the church members to pray. I just felt the peace of God and I began to sing praises and pray the rest of the way to the hospital.

Upon arriving, I was escorted to Donovan’s room, and the doctors were getting ready to administer an IV treatment of Anti-venom. His shin was black and the entire bottom part of his leg was swollen. The doctors at Reston Hospital told us they needed to transfer him to Fairfax Hospital, where they were better equipped to treat him. At this point, the doctors were very concerned as the swelling continued to spread up his leg. By the time we were on the ambulance, the swelling had extended from his toes all the way into his groin area. I sent Greer a text message requesting prayer that the swelling would stop and by the time we reached Fairfax Hospital, it had not spread any further. Over the next 24 hours, he received 4 more rounds of Anti-venom treatment, as well as morphine to control the pain. With each round of treatment, the doctors warned us that his reactions could be severe and could cause severe vomiting, respiratory issues, as well as some other things. We prayed with each round of treatment, and he never experienced any ill effects from the treatments.

The doctors were continually amazed at how well he responded to the treatments and we had many opportunities to boast in the goodness and the power of God! We were told that there could be permanent tissue damage and that he probably wouldn’t walk for at least a week. Within 2 days, he began to walk again! The swelling and all signs of the bite were gone a week later; no scars and not a trace that the bite ever occurred! The effectual fervent prayer of the righteous availed much! We are so thankful for all the friends and family that prayed through the night believing for Donovan to be healed! So many people have said things like, “Wow! You must have been so scared”! Honestly, we both had our moments, but Jerry and I were both flooded with the peace of God. We knew we didn’t need to worry, because the Lord had it taken care of. We believe that Donovan will continue to be a testimony of the power of God!
Please visit us at
www.calvarytempleva.org/