Sarah was diagnosed with autoimmune hepatitis. The doctors stressed that there was no cure. But our God is able to do exceeding abundantly above all that we ask or think according to his power that works in us.

It was February of 2016. I was in the hospital reeling from the news that i had an autoimmune disease that had no cure.  We started the conventional treatment of Prednisone and discharged from the hospital.  I had a terrible reaction to the steroids and had to stop taking them immediately. My doctor then wanted me to try some other medications, but I declined.

I believed that the Lord had put in my heart not to take them.   I continued to have weekly blood work taken and my liver enzymes began to come down. But I was still in an extremely dangerous health crisis. The GI specialist told me I would need a complete liver transplant in the near future. I transferred to the head physician of the liver transplant center at the University of Virginia.

In April 2016, I had my initial consultation and we began preparations to get on the liver transplant waiting list. 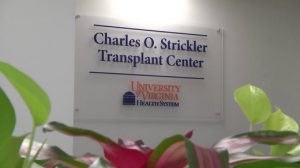 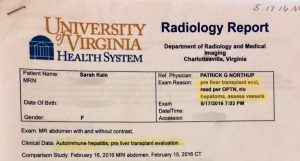 He told us that if I didn’t start the medication, I would certainly be dead within 2 years.

As Taylor and I talked and prayed about what to do, I still felt very strongly that I shouldn’t take the medication, but continue to look to the Lord.  But, I told my husband that I knew God had put him over me as my God-given head and covering. I would start the medication if at any time he felt that I should.

Together we decided to trust the Lord moment by moment, and if God wanted us to change our course He would let us know.

The song, “Bless the Lord, Oh my Soul…Worship His Holy name…Whatever may pass and whatever lies before me, let me be singing when the evening comes…” strengthened my heart during this time.  I hung it on my refrigerator and sang it to myself almost every day. 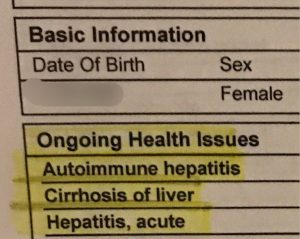 As time went on, I began to research alternative ways to slow the progression of the disease.  I became very strict about my diet hoping that would help.  Even though I wasn’t taking medication I continued to have regular blood work and follow ups at the UVA Liver Clinic.

Seven months later, in November 2016, Dr. Northrop informed me my liver enzymes were spiking again and it was imperative that I start steroids immediately or I had less than a year before a liver transplant or death.

He also recommended I go to John Hopkins and Georgetown Hospitals to get more opinions. Maybe they could “convince me of the severity of my disease to start medication.” I hung up the phone, and for the first time during the illness, I felt crippled by fear and confusion.  I had tried as hard as I could in the natural with a healthy diet, exercise, rest, eliminating my exposure to toxins, but it wasn’t enough.  I felt scared, alone, and in the dark.

That evening we met with our Pastor and his wife. We shared the grim report we had just received.   They encouraged and prayed with us, but I was still feeling very downcast.  Near the end of our conversation, Pastor Scott spoke these simple words to me. “Sarah, just make sure you’re abiding in the vine.”  Those words hit my soul like a load of bricks.

At that moment, I realized I just needed to get back into God’s presence.  Without even realizing it, I had allowed the cares of this life to crowd out the presence and Spirit of God, and now I found myself feeling lost, alone, and in the dark.

I began to fast and pray.  I needed to hear the voice of the Lord again.

On the third day, while my kids were napping and I was painting, the Lord spoke one word to my heart – REPENT.  I instantly fell to my knees, broken before the Lord as He began to show me that there was still so much in my life that was displeasing to Him. My pride, my independent spirit, my vanity, how easily I steal God’s glory when I do something “good”, how I say I’m trusting Jesus with my illness, but at the same time I was putting more trust in perfecting a healthy diet and lifestyle than I was in Him for the healing of my body.   As I began repenting, the Lord brought true remorse and change over the sins and weights in my life.

In January, Taylor and I began seeking the Lord specifically as to whether I should start the steroids and go to John Hopkins or Georgetown to see more specialists.  After a few weeks of seeking the Lord and wisdom from other counselors in our lives, we still hadn’t felt the Lord leading us in a specific direction.

My husband decided that if we didn’t sense a specific direction by the end of that week, then I should start the medication.

A few days later while I was folding laundry and praying in the Holy Spirit, I felt a prodding in my spirit to call my primary care doctor and schedule an appointment to have all my blood work checked again.  It was also during this time that I began to experience a worsening of the liver disease symptoms again. Feeling hopeless and discouraged, I decided to step out in my own wisdom and reach out to holistic liver practitioner to start 6 months of holistic therapy and supplements. I was scheduled to start the alternative therapy on the exact day my blood work results came back.

The blood work showed that my autoimmune disease was completely gone, and my liver enzymes were normal. 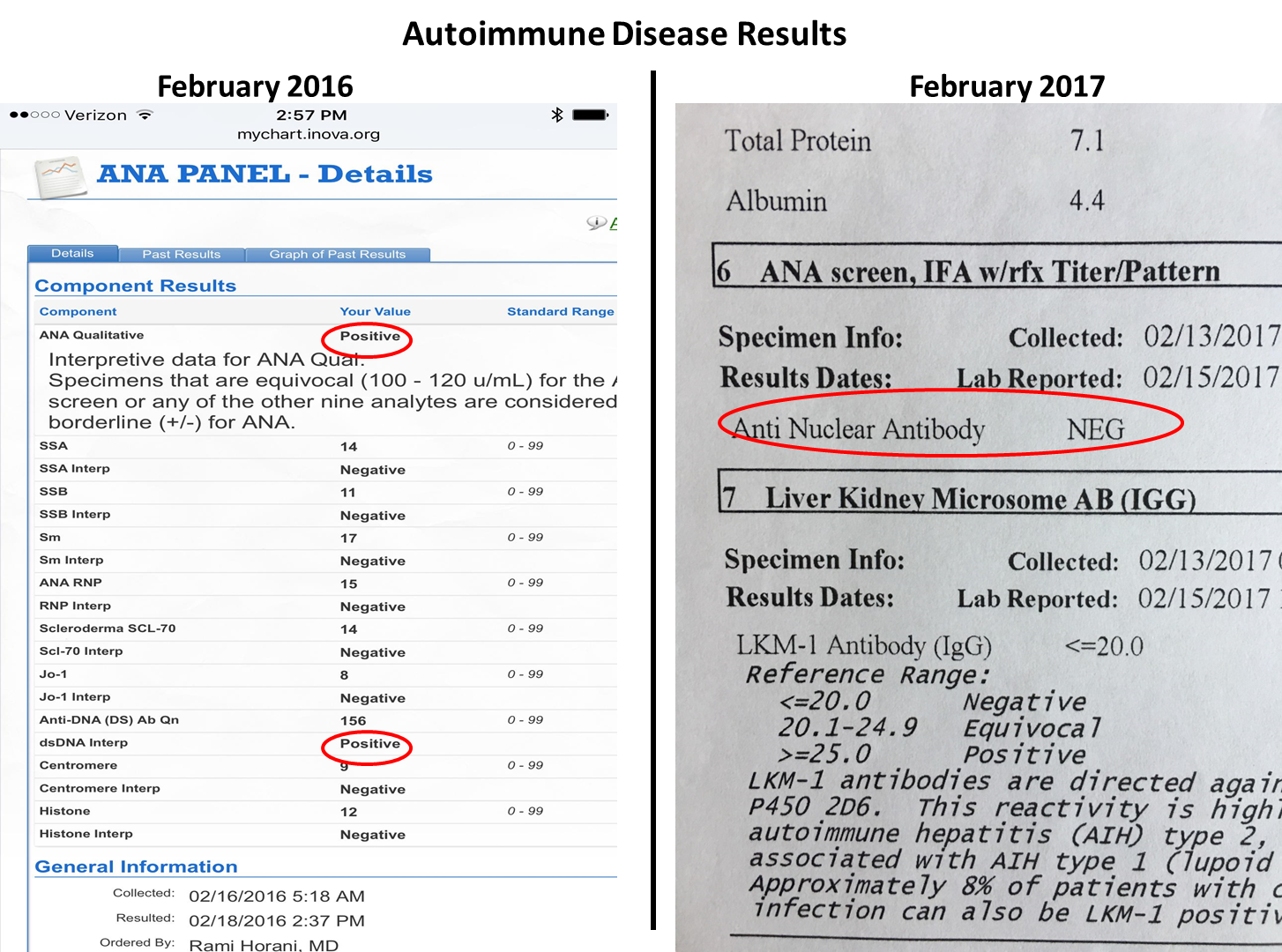 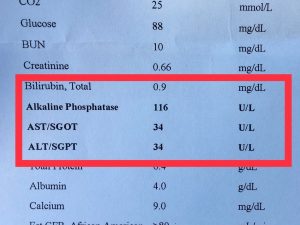 My kids were in the car with me when I read the results and we began shouting out PRAISES TO GOD!  I then called my husband and drove to my Pastor’s house to share the news. I called the liver clinic at UVA and told them about the incredible bloodwork results – the nurse was shocked, speechless.  She passed the message on to the doctor and he called me 5 times that day with different questions. The doctor said that, “I had proved him wrong every step of the way. He had never seen someone come back from end stage liver failure to perfect health. Especially with having taken no medications.”   However, because he is a man of science; I must still have the disease since it doesn’t just “disappear” and there is no cure. He wanted me to get routine blood work done and come back to see him if I get worse again.

He discharged me from the liver clinic because I definitely did not need a liver transplant anymore.

There was indisputable proof that a supernatural healing had taken place in my body. And it had nothing to do with medication or human ability.  “..for I AM the Lord that heals thee.” Exodus 15:26

In the following months, I continued to have routine blood work done as my doctor requested. The liver tests improved even more, confirming that my liver was functioning and healing from all the damage.  My increased energy and vitality alone is undeniable proof of the miracle God has done. 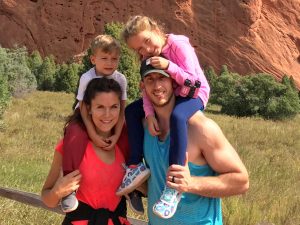 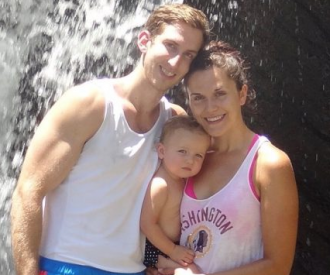